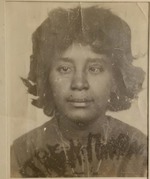 Marie Marthe Lominy was born in Port-Au- Prince, Haiti on May 13, 1938. She was a brilliant student according to her young and handsome tutor, Marcel Pardo, who would later become her adoring husband. Marie Marthe was an elementary school teacher and later a chief of service at the Haiti National Archives. Marie Marthe (known as Joujoue) was a great mother to five beautiful children.

TonMa and Joujoue named them Luc (1962-2004), Marcel, Raymonde, Philippe, and Bernadette.
Grandma Joujoue was an amazing grandmother to Johanna, Vanessa, Claudia, Karla, Rubyana,
Max, Stephania, Paola, Melissa, Sebastien, Nathaniel, and Anais. She was the lucky great-grandmother of Barriyana, Adriana, Giovanni, Janesmee, Jenevieve, Ava, and Olivia. With enthusiasm and generosity, Joujoue raised many other children “ti fanmi ou ti zanmi.” Joujoue was naturally elegant. With pride and self-confidence, she developed her signature style with remarquable simplicity. There was something chic
about the way she walked and the way she dressed herself. She took great pleasure in decorating her home and dressing up her children. She was always desirous to encourage other women to appreciate beauty.
Joujoue was a great servant of God and a devoted protegee of the Virgin Mary. She dedicated her life to bring social justice to friends and people around her. When all was just with her world, Joujoue was calm and intellectually curious. However, at the first sight of injustice, Joujoue “pa t pe ni chef ni pe.” “Pase deye do m, map regle sa a.”

She was always ready to:
Give food to the one who is hungry;
Provide shelter to the one without a place to stay;
Bring the sick to the doctor;
Liberate a victim from the hands of a tyrant;
Send an errant child to school.

We will remember her as a friend and a selfless human being
who was always at the service of others:
“Joujoue au secours.”
Adieu Joujoue!