To share your memory on the wall of Beryl Mallette, sign in using one of the following options:

Provide comfort for the family of Beryl Mallette with a meaningful gesture of sympathy.

Print
Beryl Maud Mullings-Mallette, was the sixth of seven children born to Melvina and Thomas Mullings on June 21, 1928, in the district of Hampshire, Riversdale,
St. Catherine, Jamaica, West Indies.

Beryl received her early years of ... Read More
Beryl Maud Mullings-Mallette, was the sixth of seven children born to Melvina and Thomas Mullings on June 21, 1928, in the district of Hampshire, Riversdale,
St. Catherine, Jamaica, West Indies.

Beryl received her early years of education at Hampshire School. She relocated to Kingston to live with an older sibling who past away a few years later. She has nine children, one who pre-deceased her. She was a seamstress for many years. In 1974, she relocated from Jamaica to the United States of America.

In 1983, Beryl graduated as a Certified Nursing Assistant. She worked at Doctor’s Hospital for many years. She also worked for Gulf Crest Nursing Home and Hallandale Nursing and Rehab Center.

Beryl was a hard worker and also a very dedicated mother. She brought six of her children to the United States on one application. She was very loving and wouldn’t hesitate to help anyone in need.

Beryl was a dedicated church member who participated in Bible Studies, Prayer Meetings, and Fasting Services. She also attended the fifty plus senior activities at Gateway Church monthly. During the latter years of her life, Beryl attended the Senior Program at Mount Zion A.M.E.C where she enjoyed the daily activities and field trips with her peers.

She left behind her children and family to cherish her memories, she will be sadly missed by all. Daughters: Yvonne, Shirley, Johanna, Donna, and Andrea.
Sons: Laurice, Bruce, and Courtney, forty grand children, fifteen great grand children, one sister, and host of family and friends.

Beryl is now resting in the arms of her Savior, Jesus Christ.
Read Less

We encourage you to share your most beloved memories of Beryl here, so that the family and other loved ones can always see it. You can upload cherished photographs, or share your favorite stories, and can even comment on those shared by others.

Posted Nov 06, 2019 at 01:59pm
Our thoughts and prayers are with you. Sincerely, Eric Frankovic and the Amex team with Tanya Branch

Flowers were purchased for the family of Beryl Mallette. Send Flowers 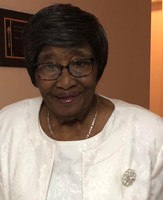