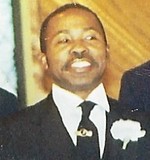 Deacon Foston Gilbert was born on September 9, 1942 in Stuart, FL. He along with his wife, Mother Lettie Gilbert joined COGBF Stuart, FL in 1968. Elder David & Mother Annie Ruth Lewis Sr was his pastor. Deacon Gilbert served as an Usher and Deacon for many years. He became the District President (FL East coast) and in 1990 he became the National Usher Board President. Deacon Gilbert served faithfully until 2013. He served as Bishop McKnight, Sr. personal assistant during the National Conventions. He served tireless and sometime with very few ushers.

As Deacon Gilbert health began to deteriorate and he begun worshiping with his family at Immanuel Full Gospel Baptist Church in Ft. Pierce, FL Deacon Gilbert will be forever remembered for his love and passion for serving God and his people. He served until he could no longer do so. On November 6, 2019 The Lord peacefully called him home.