To share your memory on the wall of Betty Gaskin-Brazil, sign in using one of the following options:

Provide comfort for the family of Betty Gaskin-Brazil with a meaningful gesture of sympathy.

Print
Betty Jean Elizabeth Gaskin was born on December 19, 1942, in Gainesville, Florida, to Isaiah and Sarah Gaskin, who preceded her in death.

She accepted Christ at an early age, at Atlas AME Church. As a young child, she attended A.L. Maba... Read More
Betty Jean Elizabeth Gaskin was born on December 19, 1942, in Gainesville, Florida, to Isaiah and Sarah Gaskin, who preceded her in death.

She accepted Christ at an early age, at Atlas AME Church. As a young child, she attended A.L. Mabane School and graduated from Gainesville High School.

She entered into holy matrimony on February 3, 1962, with William M. Brazil, in Monteocha, Florida. From this union, Mother Betty gave birth to five children. In 1970, Betty relocated to South Florida with her family. As a young woman, Mother Brazil was trained as a nursing assistant at Lindsey Hopkins Trade School and worked in her field as a nursing assistant at the Veterans Hospital.

Mother Brazil served Jesus faithfully as a choir director and a member, an usher, and as a church mother to her local and district church. Mother Brazil had a big heart and was very generous; she loved God’s people and served them in the spirit of excellence.

We encourage you to share your most beloved memories of Betty here, so that the family and other loved ones can always see it. You can upload cherished photographs, or share your favorite stories, and can even comment on those shared by others.

julius and Mae Fowlerand Family sent flowers to the family of Betty Gaskin-Brazil.
Show you care by sending flowers

julius and Mae Fowlerand Family purchased flowers and planted a memorial tree for the family of Betty Gaskin-Brazil. Send Flowers

Posted Nov 27, 2019 at 04:29pm
To Elder Brazil and the entire Brazil and Gaskin Family. We are sadden to hear of the passing of Sis. Brazil. She was very kind, humble and meek spirited saint and will be truly missed by all who had the pleasure of knowing her. May God bless and keep yall in his care.
We love you Dea. & Sis. Randolph Christie & Family
Comment Share
Share via:
KJ

Posted Nov 27, 2019 at 03:34pm
Mom will definitely be greatly missed. My thoughts and prayers are definitely with my extended family The Brazil's at this time. Her and Pop were always a joy to see. She always had a word of encouragement for me every time i saw her. Love you always Mama Brazil!!!
Comment Share
Share via: 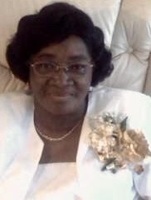