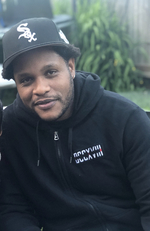 Brian O’Neil Smith was born on June 11th, 1982, in
Mandeville, Jamaica. He was the third of five children and
the first-born boy to Hyacinth Pitkin and Neville Smith.
Growing up, Brian had many nicknames; however, the
ones who knew him well called him Phat Cat or Bebo.
Upon migrating from Jamaica, Brian attended elementary,
middle, and part of high school in the Bronx, New York.
In 2000, Brian and his family moved from the Bronx to
Miramar, Florida, where he resided for many years. Brian
graduated with his GED in 2001 and shortly after, attended
Sheridan Technical College to specialize in Automotive
Technology, ultimately graduating as a Master Mechanic.
Brian worked as a mechanic for a few years. True to his
entrepreneurial spirit, he then opened up a mechanic shop
of his own.
Brian attended the Pentecostals of Cooper City, where he
was baptized and filled with the Spirit. He loved attending
services with his family and always made his way up to the
altar, where he would spend time in prayer. Some of his
favorite services were the holiday plays and songs put on
by the children at church. He loved talking about how well
they did and how cute and funny they all looked. There
was always a sincerity in his smile during these events.
Brian’s greatest accomplishments were making sure those
he loved were well taken care of. He loved and treasured
his two daughters, Aria and Zaia Smith, and would light
up when he saw them conversing via FaceTime. It was an
honor and joy to take care of his mother, Hyacinth, in
every way he knew how. Talking about cars and building
engines from scratch were the way to his heart; he loved
working on them during his free time.
Brian is survived by the following: Mother – Hyacinth
Pitkin; Children – Aria and Zaia; The Mothers of his
Children – Danielle and Melina; Siblings – Tracey, Tresha,
Marc, Toni-Lee, Sean, Nicky, Mitzie, and Leon; Nieces –
Kristan, Lauren, Brittany, and Ashley; Nephews – Stallone,
Malik, O’Shane, Sean, Ashton, Ajani, and Yohan; and by
so many other loyal family and friends.
Brian will be remembered for his strong work ethic,
unwavering love, infectious laugh, and loyalty toward
those he called family.