To share your memory on the wall of Carlton Badal, sign in using one of the following options:

Provide comfort for the family of Carlton Badal with a meaningful gesture of sympathy.

After leaving school, his first job was at Kingston Industrial Garage, then he moved on to being self-employed as a Haulage Contractorin Jamaica. He met his wife, and the love of his life, Clarice Jean and got married in 1981. This union brought along three beautiful daughters, and on March 12, 1982, they had their first son together Carlton Badal-Junior, the second love of his life. He did not cut any corners raising all of them, and they absolutely adored and respected his kind wisdom and guidance in their lives.

In 1982, his next big dream was building a home for his family, for which he did most of the construction labor. He was an exceptional provider for his family, which was proven by his hard work. The family then migrated to Florida in 2000, where they purchased their second home in Pembroke Pines, Florida. He worked at The Home Depot, where he made lasting friendships among his peers. Sadly, he had his first stroke in 2006, which kept him confined to his home. He kept busy building a network of phone pals. He made one call after
an other - so many phone calls daily, he needed three wireless phones for his routine, so if one phone batteries failed, he has another. His conversations varied from current events to keeping up with family
members.

Rollie went the extra mile for everyone he loved. He possessed a joyful charisma, always encouraged others to smile, he was always willing to listen, and, of course, offered his feedback. He was also very fun-loving. He would turn conversations into a funny matter, making everyone burst into laughter or smile. He loved referring to others by nicknames. Some were affectionate, like his wife was Monkey and his son was Boone, while others were just made up in the spur of the moment.

He is survived by many loving family members: his wife, Clarice Jean; son, Carlton Jr; daughters, Jennifer, Theresa, and Sandra; grandkids, Renee, Kalan, Roshane, Kamille, and Kirk; great-granddaughter, Madison; sons-in-law, Shawn and Richard; father, Joseph; and many brothers, sisters, brothers-in-law, sisters-in-law, nieces, nephews, uncles, aunties, and friends who are like family. People we love will leave our lives, but what will stay is how they forever change our lives.
Read Less

To send flowers to the family or plant a tree in memory of Carlton Barrington Badal, please visit our Heartfelt Sympathies Store.

Receive notifications about information and event scheduling for Carlton

We encourage you to share your most beloved memories of Carlton here, so that the family and other loved ones can always see it. You can upload cherished photographs, or share your favorite stories, and can even comment on those shared by others. 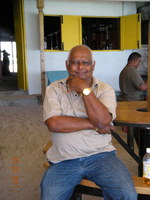 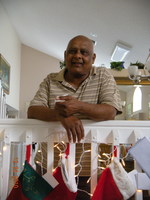