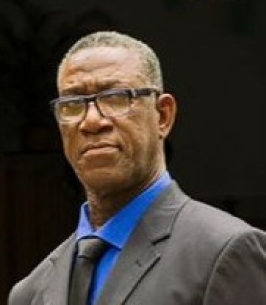 The sun rose on February 21, 1954, and Delphine Anderson and
Harold Sutherland received the gift of life to the late Cleveland
Constantine Sutherland. He was the third of seven children for his
mother and the last of eight children for his dad.
Cleveland, aka “bruck shut” aka “sleepy” aka “suddy” was born in
Sherwood Forest in Portland, and early in his life he attended the
Sherwood Forest All-Age School. After finishing school, he relocated
to Kingston to live with his mother at age 17. Two years after, at
age 19, he met a dashing young lady Eunice Duncan otherwise
known as Valerie, with whom he had his first daughter Nicola
Nadine Sutherland, otherwise known as Nadine.
He obtained his first job at the Ovaltine where he worked until it
closed its doors. Subsequent to this he became a security guard,
working at Mutual life for many years. During this time, he met
a budding young teacher by the name of Cynthia Anderson with
whom he had his second daughter Danielle Francene Cherylmae
Sutherland otherwise known as Francene. They both lived in Boone
Hall for many years, during which time he joined the Department
of Correctional Services where he worked as a Correctional Officer
for over 20 years.
Many years later, he met his wife Vannie Sloley with whom
he lived in Ray Town, until he retired from the Department of
Correctional Services. Shortly after retirement he relocated to
Florida to Live with his daughter Nadine.
Cleveland was a humble yet fearless man. In fact, he was a union
representative for the Correctional Services Union where for many
years he advocated for the rights and fair treatment of his fellow
coworkers. Cleveland enjoyed playing cricket, cooking, gambling
and was an avid debater and he did it with grace and was an
inspiration to many.
On the evening of July 27, at 7:41 pm, an angel called, “come
onto me and take your rest” and he answered. Cleveland has left
to cherish his memories, his wife Vannie, his children’s mothers