To share your memory on the wall of DaJuan Harris, sign in using one of the following options:

Print
DaJuan Christopher Harris was born on August 15, 1989, in Columbus Ohio to Juan Carlos Harris and LaWanda Christine Harris. He departed this life at the age of 31 on January 29, 2021, suddenly but peacefully from heart failure.

DaJuan g... Read More
DaJuan Christopher Harris was born on August 15, 1989, in Columbus Ohio to Juan Carlos Harris and LaWanda Christine Harris. He departed this life at the age of 31 on January 29, 2021, suddenly but peacefully from heart failure.

DaJuan graduated from Columbus Alternative High School (CAHS) where he was an active member of the Robotics Club. He also attended Broward College where he received an Associate of Arts Degree and was preparing for his senior year at Florida International University, where he
was completing his Bachelor of Arts Degree in Computer Science.
DaJuan excelled in his studies and was inducted into the Phi Chapter of Tau Sigma National Honor Society with an exceptionally high GPA of 3.92 (in other words, he was really smart 😊).
In addition to his excellence in academics, DaJuan was an active member of Upsilon Pi Epsilon, where he held a leadership role, and Developer Student Club (DSC). Both positions offered him the opportunity to share his expertise and mentor more than 100 students who were considering coding as a profession.
DaJuan was so passionate about his career path and the promise of his future. He was selected for interviews with major corporations, such as Nike and Microsoft.
Initially, DaJuan was a self-taught coder. He believed everyone should learn to code and encouraged everyone in his family to learn coding. DaJuan was creative and innovative. He knew coding was the wave of the future and lived his life perfecting his craft.
DaJuan is now not only in the presence of God, but he is also surrounded by a great cloud of witnesses to include his great-grandmothers, Christine Roberts, Irene Harris & Lucille Robinson; his great-grandfather Robert F. Harris; Grandfathers, David L. Stafford & Theodore Robinson, Sr. and his first cousin Johnathan Stafford.
His memory will be forever cherished by his parents Juan Carlos Harris of Columbus, Ohio, and LaWanda Christine Harris of Fort Lauderdale, Florida. His siblings, TaWanna Harris of Fort Lauderdale, Florida & Leah Harris of Columbus, Ohio. His maternal grandmother Carolyn (Ernie) Pugh, Columbus Ohio, and Paternal Grandparents Forrest & Sylvia Harris of Columbus, Ohio. Aunts Annette (Pastor E. Richard) McDaniel, Nikki Scott, & Mechelle Stafford all of Columbus, Ohio. Uncles Pastor E. Richard McDaniel and Robert F. Harris of Columbus, Ohio, His sole loving niece, Aya Jolie Martinez of Fort Lauderdale, Florida. First Cousins, Richard Alexander McDaniel, Robert F. Harris III, & Ceyaunna (CeCe) Stallings all of Columbus Ohio, a host of other relatives, friends and two-family pets whom he loved as his own, Paris “Black and White” Harris, his “cat-niece” and Ruckus “Ruckus Pup” Scott his cousin-pup.
Read Less

To send flowers to the family or plant a tree in memory of DaJuan Harris, please visit our Heartfelt Sympathies Store.

Receive notifications about information and event scheduling for DaJuan

We encourage you to share your most beloved memories of DaJuan here, so that the family and other loved ones can always see it. You can upload cherished photographs, or share your favorite stories, and can even comment on those shared by others. 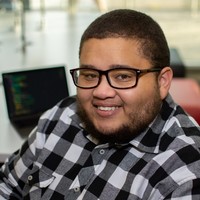