To share your memory on the wall of Damion Thompson, sign in using one of the following options:

Provide comfort for the family of Damion Thompson with a meaningful gesture of sympathy.

At a very young age Damion migrated to the United States of America to live with his Uncle Derrick and Aunt Carol Williams. It was during this time he gave his life to the Lord Jesus Christ at the Mount Zion Apostolic Church in Miami,Florida. He was very active in ministry and assume such roles as president of the men’s
department and a member of the senior choir. In February of 2004, he met and fell in love with his wife
Simone Headley. They both courted for a little over a year and was married shortly after, on May 15, 2005
by both Pastor R.A Tracey and Pastor Brigdewater. Shortly after, they gave birth to two handsome boys,
Damaine, 14 and Joshua, 8. Damion was a great husband and father. He would sacrifice whatever it took to provide for his family.

Damion was an ambitious man who was goal oriented and worked well with anyone. He was an outstanding salesman and could sell ice to an Eskimo because he had perfected his craft. He was recognized internationally as the top salesman several years in a row at Hertz Rental. He later pursued a career in insurance sales and became a valuable part of the Paul Group team at Lincoln Heritage.

Damion was a social butterfly, a trusted friend to many. Damion assumed various roles
at Genesis Apostolic Ministries under the leadership of Pastor Webster. He was a minister, treasurer,
and musician. A man who truly loved the Lord. Lastly, Damion was one of the best soccer coaches at the
city of North Lauderdale, leading his team to victory time after time. He enjoyed working with the youths
and always have and word of wisdom and encouragement for them. Damion had many successful
seasons, winning first place and championship trophies many times. Overall, as we gather here today to
say our final farewells to a fallen hero, his legacy still lives on. That even as we grieve Damion is resting
in the arms of his Lord and Savior Jesus Christ, while saying his favorite words, “I’m good”, “I’m alright”.

May his soul rest in peace
Read Less

We encourage you to share your most beloved memories of Damion here, so that the family and other loved ones can always see it. You can upload cherished photographs, or share your favorite stories, and can even comment on those shared by others. 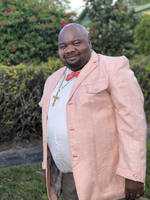