To share your memory on the wall of Deacon Climmie Hill, sign in using one of the following options:

Provide comfort for the family of Deacon Climmie Hill with a meaningful gesture of sympathy.

In 1977 Clim married the love of his life, Bonnie Robinson-Hill. This union was blessed with 5 children. The love that he had for his family could not be described by mere words. Everything that was ever done or ever sacrificed was because of the undeniable love he had for the well-being of those who called him husband, daddy, Grandpa, Papa, son, brother or uncle. There was NOTHING that he would not do to provide or protect those close to his heart and they knew it. Being a man of prayer, He could be heard every morning calling the names of his family members praying for their soul, safety, success and protection. Generations before and after were shown, felt, experienced and knew of the love he felt for each one of them.
Climmie joined the Church of God by Faith under leadership of the late, Elder John Robinson, Jr. He served faithfully as an usher and was then promoted to the office of Deacon. Climmie held that position for over 35 years. He was also appointed as a finance board member for the local and district committee.
The Journey Ends
Precious in the sight of the lord is the death of his saints Ps 116:15
On Wednesday November 6, 2019, Climmie traded time for eternity, to rest from all of his labor. Though his passing was unexpected and sudden, the strength, love and instilled values will pass on to all who will carry his legacy.
Along with his parents he was preceded in death by; Brothers, James Edward Hill and Jay Roy Hill.
Those left to cherish his memory and celebrate his life are his wife, Bonnie Robinson-Hill of Port St. Lucie, FL; Sons, Kenny R. Robinson (Angela) of Clearwater, FL, Tony Hill of Ft. Pierce, FL, Climmie L. Hill, Jr. (Drenna) of Orlando, FL, Rev. Michael J. Hill (Kierra) of Ft. Pierce; Daughter, Crystal D. Spates (Charles) of Port St. Lucie, FL; Adopted Children, Tabitha Hill, Darlene Gilbert,and Sobrina Crenshaw; Grandchildren, Miranda, Megan, Mariah, Jayshawn, Chontell, Climmie, III, Mahogany, Devin, Aniya, Kelis, Kinslee and Christian; 2 Great- Grands; Siblings, Samuel Eugene Hill of Ft. Lauderdale, FL, Eddie Mae Hill-Allen ( Ruben) of Valrico, FL, Leon Wilson Hill of Missouri City, TX, and Curtis Jermaine Hill (Rhonda) of Ft. Pierce, FL; Mother -in Law, Mother Maxine Robinson; God-Children, Tabitha Boatwright, Gena Lunsford, Joshua Frederick, Jessica Sims, Shaylen Lammers, Gregory Jerger, Jr. and Makayla Jerger and a host of Nieces, Nephews, Cousins, In- Laws, Church family and friends who will miss him deeply.
Read Less

We encourage you to share your most beloved memories of Deacon Climmie here, so that the family and other loved ones can always see it. You can upload cherished photographs, or share your favorite stories, and can even comment on those shared by others.

Posted Nov 15, 2019 at 09:16pm
Such a kind person to know a man after the heart of God. Praying for your during this your time of loss.
Psalm 23:1 The Lord is...
Chaplain Patricia G.Freeman
Baton Rouge, LA
Comment Share
Share via:
SL

Posted Nov 15, 2019 at 08:29am
And the peace of God, which passeth all understanding, shall keep your hearts and minds through Christ Jesus.

Posted Nov 14, 2019 at 08:14pm
To the family of the late Climmie Hill Sr. my heart felt sympathy goes out to everyone. Bonnie be strong for I can imagine how it feel to lose that precious love of your life. Climmie was the apple of your heart but God wanted that special flower in his garden he look around and found another empty spot and wanted it fill so he ask Bro. Climmie to come on and filled that spot in his garden, keep your eyes to the hill --look to the Lord for strength and he will strengthen you in every way... yes it will be days that you are going to weep, you are going to reminisces the good times and the bad times..but just remember , remember the love that you both share. But be strong for the children and grand-children and great grands for that is what he want you to do . Stay blessed and pray for God will shine his light upon you and strengthen you in every way.

Sentiments of Serenity Spray was purchased for the family of Deacon Climmie Hill. Send Flowers 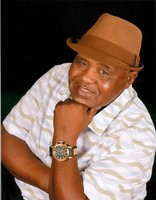