To share your memory on the wall of Derrick Anderson, sign in using one of the following options:

Print
Derrick Anderson was born on November 11, 1940 in the small district of Keith, in the beautiful parish of Saint Ann Jamaica. Derrick was the youngest of 3 children to parents Azariah Anderson and Adora Thomas.

Derrick attended Keith Prim... Read More
Derrick Anderson was born on November 11, 1940 in the small district of Keith, in the beautiful parish of Saint Ann Jamaica. Derrick was the youngest of 3 children to parents Azariah Anderson and Adora Thomas.

Derrick attended Keith Primary School, after leaving school, he wanted to be a cabinet maker so he learned the trade taught by Harold Minot. Derrick started making furniture for a living, a skill which he mastered.

Growing up, he didn’t have a lot of friends, his hobbies was making slingshots to shoot birds, playing with his bonjovi, he loved cricket and making kites during Easter time. Derrick also loved to sing songs that warms the heart;

Derrick had an older child, named Kirk Anderson, who predeceased him. During his early years Derrick and Imogene Palmer were childhood friends who grew up in the same community, they had 3 children Conroy, Kay, and Carlene. Sadly, Imogene died at a very young age and her children were left motherless. Derrick took care of his children the best way he could. In the early 1970’s, Derrick left the scenic countryside for Kingston and started a new chapter. Derrick started working at Paper Processors as a Machinist , there he met my mother Deta Thomas, with whom he formed a friendship and started courting her. Derrick knew Deta had three children, Horace, Michael and Michelle, he didn’t care he was willing to marry Deta because he loved and cared for her. So he moved to Spanish Town, there he started living a life with Deta. As time went on Derrick and Deta had two children together, Kareen and Omar. In August of 1977 they finally got married.

While living in Spanish Town and working at the factory, Derrick wanted more for his family, he continued making furniture as a hobby, he raised chickens, plant fruits and vegetables, then reap the crops, and sold the goods at the Spanish Town market.

Derrick then moved out of Spanish Town in the early 80s into Kingston. As time went on my mom migrated to the United States. Derrick was left to raise Kareen and Omar in a community filled with crime and violence. He did a fantastic job raising us, making sure his children had what they need with the help of mom. Education was a huge factor for Derrick, he wanted to make sure his children did greater than he did without an high school education. He taught us to respect our elders, he teaches us to be kind and always see the good in people. He made sure his kids didn’t get mixed up in the happenings around the community. Derrick was a firm believer in giving back to the community. He was a member of the Neighborhood Watch Community in Seaview Gardens; he was well respected and loved by his neighbors.
In 1991 Derrick migrated to New York to join Deta. As time went on Derrick adapted to his new lifestyle. One day after telling a close family friend about a dream he had, he wanted to know what church she attended. After visiting the church he got baptized, holy ghost filled and he began a new chapter living in the word. He joined the choir and was promoted to Assistant Director for the Maintenance Department and Usher at New Life Tabernacle in Brooklyn, New York. He served in this position for 6 years until he relocated to Florida.

Derrick, adjusted to his life in Florida and started working for Publix Supermarket, where he had good rapport and formed lasting friendships. As time passed by, he was diagnosed with Prostate Cancer, which he survived. Prior to his cancer diagnosis, Derrick had other health issues, a mild stroke, congestive heart failure and COPD. The COPD got worse which caused him to be in and out of the hospital. Each visit to the hospital he was treated and released.

In the last few days of Derrick’s life, he was very happy. When I saw Derrick on 11/24/19 he was glowing for the first time in years and he didn’t look sick, pale, or sad. He was just glowing. I even said, “Daddy, you look great man!” He replied, “I feel great!

On 11/27/19, Derrick passed away at Port Saint Lucie West Hospital. Derrick was ready to be with his Lord and Savior, Jesus Christ.

I strongly believe Derrick knew he was going to leave us. If anyone knew him, you would know that he was a quiet man. Nothing bothered him, except our mother. He was very efficient, capable, consistent, humbled and had a very mild temperament. Derrick loved to sing and play his guitar. There are so many things I can say about him that would take up this entire program.

Derrick is survived by his wife Deta, his children Conroy, Kay, Carlene, Kareen, Omar,
his stepchildren Horace, Michelle and Michael, 9 grandchildren and 6 great grandchildren, his nieces Marjorie and Jenny, his nephew Dale and a host of cousins.

Derrick was known as Boysie to his childhood friends and family called him Papa D. He will be greatly missed but never forgotten by those who loved him dearly.
Read Less

To send flowers to the family or plant a tree in memory of Derrick N. Anderson, please visit our Heartfelt Sympathies Store.

Receive notifications about information and event scheduling for Derrick

You will receive any future notification messages.
Print

We encourage you to share your most beloved memories of Derrick here, so that the family and other loved ones can always see it. You can upload cherished photographs, or share your favorite stories, and can even comment on those shared by others. 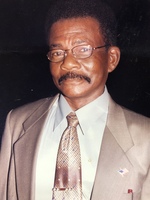