To share your memory on the wall of Everard Chaplin, sign in using one of the following options:

Print
Some knew him as Mr. Chaplin, for some it was Chappy, for others Brother Ever and dad. He was a great son, brother, uncle, dad, and granddad. He was born in St. Mary Jamaica on December 6, 1947 and was given the name Everard Agustus Chaplin.

Some knew him as Mr. Chaplin, for some it was Chappy, for others Brother Ever and dad. He was a great son, brother, uncle, dad, and granddad. He was born in St. Mary Jamaica on December 6, 1947 and was given the name Everard Agustus Chaplin.

His formative years were spent living with his mom and great grandparents. He was nurtured by very strong and passionate women. Their influence on his life was evident in his strive for excellence, his quest to succeed and his dedication and commitment to bringing others along.

Even as a small boy, brother Ever sought to make his mom and great grandparents very proud; he often told the story of his first recitation. This was a significant and impactful experience in this young boy’s life. The success and adoration he received from that experience became a benchmark for how he functioned throughout the rest of his life; his confidence and expectations of others. The famous poem was titled “they called me the little putoo”. I say famous because over the years, his mom, grandmother, auntie and siblings had the opportunity to hear this story many times. He shared that he never could forget the day when he made his family proud especially his great grandmother. He talked about the discipline and commitment to ensure he knew his lines word for word, the importance on projecting with confidence and connecting with his audience. He used this experience to motivate both children and adults. He recited this poem at the tender age of 5 or 6 years old, however he relived the experience each time he told the story right through adulthood. He shared how important it was to make his family proud as they sat in the front bench and watched him as he stood tall, ensuring every word was stated clearly, that he could not twitch or move around but that he had to stand tall, connect with his audience and project.

Brother Ever shared that his family was proud, the entire community talked about Isis boy and how well he did with his recitation. I believe Brother Ever’s confidence, charm and character were cemented that day. He exuded confidence and had an attitude nothing was impossible to attain.

He attended chesterfield all-age school and graduated from Dunrobin high school in Kingston Jamaica.
As a teen, he worked part time at the Castleton Botanical Garden. During his time working, he was known as a responsible, meticulous, mature young man. He hobnobbed with adults, leaders and politicians alike. It was during this stint that he met two American families visiting the gardens. He made such an impact on them that they immediately wanted to adopt him as an honorary member of their families. To that degree both families invested in Brother Ever’s education, shared business ideas, helped him with his business plans etc. Over the years, he would visit them in the US and functioned as their host when they visited Jamaica.

After graduating from high school, Brother Ever began working for the Jamaica drivers license department. Mr. Chaplin as he was called built a reputation of being a fair and courteous examiner and quickly moved up the ranks in that business.

On a personal level, as he succeeded with his business plans, he built a home for his mother and siblings. As the eldest son in the family, he took on the role as a father figure in the home; he was a provider and protector of his family especially his sisters. He encouraged education; when his sisters went off to high school or college, they lacked nothing because Brother Ever would ensure all their needs were met. He was always there to celebrate their many achievements and provided tangible support during challenging times.
He was a young man when he had his first child Alton who Brother Ever named after his dad. Over the subsequent years he fathered six more boys and two girls. Brother Ever loved all his children but he had a special soft spot for his girls; remember his formative years were influenced by women, he was extremely protective of his mother, sisters and when he had his daughters this nurturing/ protective behavior were on full display.

He was a world traveler for both business and pleasure. As a matter of fact, he had just returned to Jamaica after traveling to Japan on business. He lived in two other countries outside of Jamaica. After marrying Beulah, he left his beautiful Jamaica and moved to Canada. They later moved to Miami where they bought a house and had their only child Nicole. After his divorce, he moved back to Jamaica, he said in Jamaica he was treated with respect, he was ”Mr. Chaplin” , however in America, he was just another black man and that came with all the discrimination baggage’s etc. He had discussed many times his plans to marry Coraline the mother of two of his children Kevin and Janel.

After returning to live in Jamaica, Brother Ever resumed his business plans; partnering and collaborating with many on real estate and car dealership investments. He also took on the leadership role as president for JUTA where he was still serving right up until he had his stroke in 2011.

For many, Mr. Chaplin was known as the one who helped them through school, helped them to start their own business, helped many to work abroad on farm work, helped to negotiate and secured jobs for many on the various cruise ship lines. He helped others to achieve home ownership, shared his homes with both in-laws and family friends. He was kind and had a reputation as a philanthropist.

In closing, it is important to note that Brother Ever never forgot his religious upbringing. While in Jamaica, he spent many of his Sundays in church and as part of his Sunday ritual bonding at dinner with his Aunty Mallett. When visiting his family in Florida, he would not miss the opportunity to invest and attend the church founded by his sister and her husband. He was loving, funny, witty and full of grit. Brother Ever was a real story teller, His son Dave had a front seat to the many tales because he lived with his dad for most of his life.

Brother Ever will be sorely missed by all; he left behind his mom Isis, ten of his siblings, his nine children, many grandchildren, nieces, nephews and in-laws. While he has gone ahead to be with the Lord, he will not be easily forgotten by the many lives he touched.
Read Less

To send flowers to the family or plant a tree in memory of Everard Chaplin, please visit our Heartfelt Sympathies Store.

Receive notifications about information and event scheduling for Everard

We encourage you to share your most beloved memories of Everard here, so that the family and other loved ones can always see it. You can upload cherished photographs, or share your favorite stories, and can even comment on those shared by others.

Posted Jul 11, 2020 at 01:12pm
I did not know Mr. Chaplin personally however I am a very close friend of his daughter, Nicole Chaplin. She's like a sister that I never had and I felt deep sorrow to hear about such a major loss.

I know it's a difficult time for all of you. I am sending My Deepest Condolences to the family. My thoughts are with you. May God send His comforting angels to surround you. May the Peace of the Lord be with you always.
Comment Share
Share via: 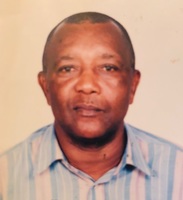