To share your memory on the wall of Ezekiel Murdock, sign in using one of the following options:

Sidney was more than a mechanic, he was highly sought after for his culinary skills. You could enjoy the delicious taste of his famous jerk chicken at jerk festivals in New York, New Jersey, and Florida. Whenever he was around, you were sure to savor his pumpkin soup, curried goat, or a succulent fish head. Sidney was very proud and ambitious. As a young man, he purchased an Austin Cambridge motor car-which was a huge accomplishment back then in the rural hills of St. Andrew. Uncle Sidney was a family man. He was always welcoming and accommodating to his family, and a genuinely kind and pleasant person to be around.

Sidney always placed the needs of others above his own. He gave freely, never leaving you empty handed. He was the eternal optimist, who saw the glass half full, never half empty. Uncle Sidney always offered to help; whether it was to fix your car or clean your yard, no job was too big or too small. He lived his passion-to be a blessing to others.

Though he still had unfulfilled dreams and encountered many losses and hardships, he lived his passion and can be acknowledged for the positive impact he had on the lives he touched. Sidney was a loving brother, a dear uncle, a faithful cousin, and a good friend. He will always be remembered for his loving kindness.

Ezekiel was predeceased by his son, Carlos, his parents, and other siblings. He leaves behind his only sibling, his sister Beatrice, his aunt, his nieces and nephews, cousins, and many friends. May his soul
rest in peace and light perpetual shine upon him.
Read Less

To send flowers to the family or plant a tree in memory of Ezekiel Murdock, please visit our Heartfelt Sympathies Store.

Receive notifications about information and event scheduling for Ezekiel

We encourage you to share your most beloved memories of Ezekiel here, so that the family and other loved ones can always see it. You can upload cherished photographs, or share your favorite stories, and can even comment on those shared by others.

Posted Nov 06, 2019 at 03:26pm
Memories dont leave like ppl do ,they always stay with you Rest in peace Sidney 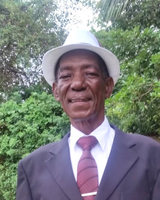