To share your memory on the wall of Geraldine Dawkins, sign in using one of the following options:

Reared by her grandparents, Ida and Henry Robinson, Geraldine (fondly referred to as Geri) learned the importance of having a God-fearing life and education at an early age. As such, she answered the call of salvation at Jerusalem Baptist Church (a little church in the woods according to Geri), where she was baptized and served as a faithful member. She was educated in the public schools of Cumberland County, New Jersey and graduated from Bridgeton Senior High School in 1976.

While residing in New Jersey, Geri gave birth to her two girls, Heather and Lisa. With a desire to reside closer to her mother and siblings, she relocated to Florida in 1980. Within a short time, she was employed by the Department of Health and Rehabilitative Services, currently known as Florida Department of Children and Families, (DCF) in 1981 and later gave birth to her son Willie Jr. In the years to come, God blessed her to nurture a nephew, Richie, and daughter, Nicole.

In 1999, Geri met her soulmate, Neville Dawkins, whom she married on March 28, 2014. He gave her a new nickname, “Geral Queen”. Together, they could often be found rendering service at a celebration ceremony for a colleague or other social activity. She was very engaged in a purpose-driven life and used her talents of cooking and interior decorating to engage others. Those skills also caused her to be successful in catering and decorating venues for social events, which was a post DCF career she endeavored to pursue. Geri also found much pleasure in shopping and travelling, especially with her “BFFs”.

Mrs. Geraldine “Geral Queen” Robinson Dawkins, age 62, completed her journey and transitioned into eternal rest on Wednesday, December 25, 2019, at her home in Miramar, Florida, surrounded by her family and a few close friends.

She is preceded in death by two siblings, Dianne Noble and Carl Watts - FL
Read Less

To send flowers to the family or plant a tree in memory of Geraldine Dawkins, please visit our Heartfelt Sympathies Store.

Receive notifications about information and event scheduling for Geraldine

We encourage you to share your most beloved memories of Geraldine here, so that the family and other loved ones can always see it. You can upload cherished photographs, or share your favorite stories, and can even comment on those shared by others. 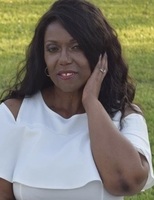