To share your memory on the wall of Hilda Allen-Jolly, sign in using one of the following options:

Provide comfort for the family of Hilda Allen-Jolly with a meaningful gesture of sympathy.

Print
Hilda Allen-Jolly was born on June 16, 1930, in St. Ann Parish, Jamaica, and raised in Westmoreland Parish. Not much is known of her formative years but, as a young woman, Hilda emigrated to Britain in the late 1950's.

Soon afterwards, s... Read More
Hilda Allen-Jolly was born on June 16, 1930, in St. Ann Parish, Jamaica, and raised in Westmoreland Parish. Not much is known of her formative years but, as a young woman, Hilda emigrated to Britain in the late 1950's.

Soon afterwards, she became a certified hairdresser and cosmetologist. After finding cosmetology unrewarding, Hilda decided on a more fulfilling profession in the medical field, first getting qualified as a medical secretary, then continuing her studies and becoming a certified nurse.

After living and working in Britain for two decades, Hilda immigrated to the USA in the late 1970s and settled in New York. It was there that Hilda would meet the love of her life and future husband, Ken. Around 1980, Hilda and Ken co-founded a successful business, Jolly’s Autobody, in St. Albans, New York.

In 1986, fed up with the harsh New York winters, Hilda and Ken decided to give it a go in Florida. They first moved to Fort Lauderdale, eventually settling down in Pompano Beach. While in Pompano Beach, the Jehovah’s Witnesses reached out to Hilda. Hilda studied and learned the truth from the Bible and was baptized on June 23, 1997. Hilda quickly became an active member at the Kingdom Hall of Jehovah’s Witnesses. She enjoyed every avenue of her preaching work, especially reaching out to young incarcerated
women from whom she received several letters thanking her for sharing the Bible’s truths with them, and it was only due to failing health that she could no longer actively take part.

Hilda loved singing the Kingdom songs, her favorite being “How Does it Make You Feel”.

Hilda truly believed in Jesus’ promise, as said in John 5:28-29, that there would be a resurrection, and she slept peacefully knowing that when Jesus called she would be able to answer. Hilda’s beloved
Ken looked forward to that call as he slept on November 30, 2016. Hilda joined him in that sleep on October 10, 2019.
Read Less

We encourage you to share your most beloved memories of Hilda here, so that the family and other loved ones can always see it. You can upload cherished photographs, or share your favorite stories, and can even comment on those shared by others. 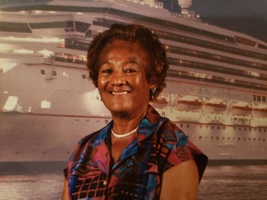