To share your memory on the wall of Jean Harding, sign in using one of the following options:

She attended the St. Joseph School for Girls on Duke Street in Kingston.
Jean is remembered by her love of cooking and the girls were given a new
addition to their miniature cooking sets every Christmas. Going to play at
the park in Allman Town was one of her favorite past times.
In September 1950, her mother passed away forcing a barely 15-year-old

Jean to live with her father’s mother in Kingston, 13 Chisholm Avenue
address. Every Sunday, her grandmother took her and her brothers and
sisters to the Holy Trinity Cathedral.

Jean was a skilled dressmaker and seamstress. She learned her trade from
both her mother and her grandmother and became a master of the craft
in her own right. Jeanie, as she was affectionately called, conceived the
first of her five children, Errol Hinds (or “Honey” as she liked to call him)
with Mr. Norris Hinds in 1954. After which she met the love of her life,
Eric Harding and they had their first child together, Erica aka “Ka-Ka”.
The couple got married and had their second child, Marie “Mar-Mar”.
Two years later, Marlene lovingly called “Minzie” was born. The couple
separated and the first of the Kelly’s, Lennox “Lee-Lee”, was born in 1976.
Over a decade later, grandma gained another son, Ryan Deperalto
affectionately known as “Ramble” or “Ry-Ry”.

Over the years, she became the bedrock for a far more expansive family
in her grandchildren: Terica “Terry”, Jamila “Jami”, Trimaine “Trimmy”,
Mark “Marky”, Ramalho “Malho”, Breanna “Bre”, Ricardo “Rickiboo”,
Malique “Mal”, Gabriella “Gabbie” and Bradley. (A mouthful indeed and
that’s not even counting her great-grandkids.)

Jean Harding was a loving, kind and giving person. Because of this love
she cared for many children throughout her days. Her legacy was that of
a love that spanned from her own flesh and blood to the rest of her circle.
Delroy, Kitto, Tippa, Lloyd, Jason, Mark and Shauna-Lee are just a handful
of recipients of Jean’s legacy of love and care. She was a mother to almost
everyone who knew her.

Those of us who knew her can attest, life with grandma Jean was full of
fun, laughter and excitement. From sewing underwear (or more aptly,
“draws”) to making clothes for our dollies, to going to the beach or Hope
Gardens, to playing dandy shandy, to dancing to the week-end Oldies.
Remember that one time she got on somebody’s bicycle and rode like the
wind? She was undeniably a ball of fire, which was coincidentally the name
of her favorite plant.

In the year 2000, grandma moved to the Bronx to live with her father where
she resided until she went home to meet her maker on April 21, 2020.
Grandma, Jeanie, Mommy, you will be missed. You were someone’s
daughter, mother, auntie, sister, cousin and friend. You are gone but
certainly not forgotten.
Read Less

To send flowers to the family or plant a tree in memory of Jean Clarke Harding, please visit our Heartfelt Sympathies Store.

Receive notifications about information and event scheduling for Jean

We encourage you to share your most beloved memories of Jean here, so that the family and other loved ones can always see it. You can upload cherished photographs, or share your favorite stories, and can even comment on those shared by others. 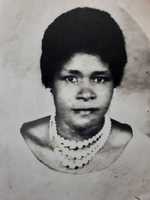