To share your memory on the wall of Jean Pernier, sign in using one of the following options:

Provide comfort for the family of Jean Pernier with a meaningful gesture of sympathy.

Print
In lieu of flowers the family is requesting donations be made to the The American Kidney Fund in the name of Jean Yves Pernier https://www.kidneyfund.org/get-involved/ways-to-give/memorials-and-tributes.html


Yves was born on Nove... Read More
In lieu of flowers the family is requesting donations be made to the The American Kidney Fund in the name of Jean Yves Pernier https://www.kidneyfund.org/get-involved/ways-to-give/memorials-and-tributes.html


Yves was born on November 18, 1953 in Port-Au-Prince (Haiti) to Joseph and Jeanne Pernier. He was the fifth of seven children. He grew up in Port-au-Prince, moved to New York to further his career, then finally settled in South Florida, a few years ago.


Growing up, Yves was very studious, always curious to expand his horizons and really enjoyed playing sports. After completing his University studies, he joined the Foreign Affairs Ministry, as a career diplomat. Over the next decades, he traveled to the United States and the Dominican Republic, to represent and defend Haitian interests.


While stationed abroad, Yves took great pride and was known to go above and beyond, to serve and assist the Haitian Diaspora in any way he could. Over the years, he also made sure to instill this pride of service to his children.


It is this pride in service, coupled with his love for sports and country, that later led him to join the Haitian Soccer Federation, as an administrator. For many years, he worked very hard to improve and promote his favorite sport.


Yves had a passion for painting. He also loved researching everything associated with Haitian culture. And he combined his two favorite hobbies to create extraordinary art. His paintings of various vistas and elements of Haitian culture were and will continue to be much admired by his friends and family.


Yves is survived by his two children, Melissa and Alex. His sisters Andrée, Marie-Carmelle, Nirva and his brother Serge. And a host of nieces, nephews, cousins and friends.


Those who preceded him in death, his father and mother, Joseph and Jeanne. His sisters, Marie-José, Yvrose and his brother Claude.
Read Less

We encourage you to share your most beloved memories of Jean here, so that the family and other loved ones can always see it. You can upload cherished photographs, or share your favorite stories, and can even comment on those shared by others. 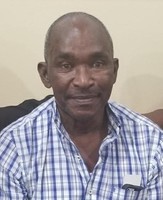