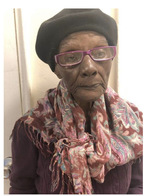 Kind, strong, quiet, easy-going, calm, soft-spoken, unselfish, nurturing, and caring. These are just some
of the words that have been used to describe our grandmother, Ms. Joyce, or as we affectionally call her,
Mama.

Joyce Agatha Irving (nee Falconer), was born August 17, 1928, to Claudius Falconer
(Tata) and Virginia Spencer, in Bellmore, St. Thomas Jamaica, West Indies. Her mother died when
she was six years old, and her father moved with the four children to Pinnacle Rastafarian settlement,
where they lived until it was dismantled. She and her sister, Olga, were then sent to live in Kingston to
attend school; however, she was not sent to school as intended. The family she lived with had her doing
household chores, and she returned to St. Thomas when her father realized she was not going to school.
He then sent her to an aunt in Bath, St. Thomas, who was supposed to teach her to sew; instead, she had
Mama transporting coconuts and making coconut oil. She was not treated well, and her father went to
get her. After that, she would travel back and forth from St. Thomas to Kingston, doing domestic work
to make a living.

Joyce met Dazivado Irving, and they were married in 1958. The union produced three children, Aldith,
Egbert, and Winston, who is deceased. After Dazivado died in 1972, leaving her to raise three teenagers,
with a quiet resolve, she persevered and supported her children as best she could. In 1981, Mr. Byron
Gayle entered her life and became her loyal companion, until his death in 2011. Mama lost her son,
Winston, unexpectedly in January 2012, after losing Mr. Gayle two weeks prior. This really devastated
her, especially having to bury her son. I am sure she suffered from a broken heart until the day she died.

Ms. Joyce provided room and board for the teachers at White Hall Primary School. As if that was not
enough, Mama operated a grocery store which served the community, especially the children and
teachers from the primary school. Being the industrious woman she was, after her shop closed, she
continued selling food items from her farm and sometimes at Morant Bay Market. Mama also took an
active role in her community, whether it was taking census, attending PTA meetings, or contributing to
the burial scheme. For many years, she was a member of the White Hall Anglican Church, which was
across from her house.

Ms. Joyce loved cooking and baking. She loved her breadfruit, peas soup, and ground provisions. Every
Sunday, we would awaken to the sound of the pressure cooker, the smell of breadfruit roasting, and
chocolate tea, (well this is what I remember) and this was before she went to church. There would also
be a pudding or cake for dessert every Sunday. Easter, she would bake buns, and Christmas always had
Christmas cakes. She was also known for her homemade guava jam. Farming was another pastime that
Mama enjoyed, and she would have us accompany her many times when she went to her farm, known
as “garden field.”

Mama was very family-oriented and taught us by her actions how particularly important it was to cherish
those bonds. As children, we would go for walks to visit elderly family members like Uncle Kay and
Aunt Merce, to make sure they were okay. She played an instrumental role in our upbringing and was
a great help to our parents. Based on the results, it is clear she did an awesome job. Ms. Joyce was the
grandmother who supported our interests with her presence. She would visit the USA to spend time with
her grandchildren, attending graduations, birthday parties, and first communions. She always wanted
to do for us as if she had not done enough. I would tell her not to worry; it was her time to relax and be
taken care of. She already did her part. She immigrated to the USA in 2010, and lived in New York before
moving to Florida last year. She was baptized and became a member of the New Jerusalem SDA church
in Hempstead, NY.

Mama is sorely missed, and the values we learned from her and the way she lived her life will stay with
us always. For someone who suffered great loss and endured struggles, she was never bitter. We are
blessed to have had her for 91 years! You can rest now, Mama, and even though it hurts and our hearts
are shattered, we console ourselves knowing you are truly at peace knowing how much we loved you and
how much you loved us unconditionally. Mama leaves behind two sisters; two brothers; two children;
seven grandchildren; five great-grandchildren; as well as many nieces, aunts, cousins and friends. Rest in
Peace. Eternal Peace. We love you, Mama.