To share your memory on the wall of Larry Chisholm, sign in using one of the following options:

Provide comfort for the family of Larry Chisholm with a meaningful gesture of sympathy.

He was a very persistent person and knew what he wanted. For example, he admired his future wife Marcia
since he laid eyes on her over 30 years ago and never let her forget it. He pursued her until she said yes. Marcia Francis became Marcia Francis Chisholm on July 4, 2002 making the day a triple celebration- their anniversary, her birthday and Independence Day. Larry was as handy at home as he was at work and would
do most of the repairs on their house in New Jersey. He spent the rest of his free time doing his favorite thing-
watching television. A TV buff, Larry could tell you the names of all the actors, previous movies and tv shows
they were in and was always up to date on the latest movie releases. He enjoyed food, especially giant steaks, jerk pork and fluffy pancakes.

Marcia remembers Larry as someone who enjoyed travelling- going on trips and cruises to Jamaica and
England. He loved Jamaican music. Though he could not understand a word, he loved the rhythm! A big baby, Larry enjoyed being taken care of. Marcia and Larry enjoyed 17 wonderful years together. The couple moved to Florida in 2018 and though the time there was short, Marcia is comforted in the knowledge that God has a plan.

Larry quietly passed away to be with his heavenly Father on December 7, 2019 at age 71. He is survived by
his sister Joann, wife Marcia, sons Darryl and Jeremy, stepdaughter Shemeka, nephews- Marc and his wife
Tara, Christopher, Michael and his wife Kneena, Ryan and his wife Yayana and Mathew; niece Kelly and a host of family and friends in North Carolina and New Jersey.
Read Less

To send flowers to the family or plant a tree in memory of Larry Chisholm, please visit our Heartfelt Sympathies Store.

Receive notifications about information and event scheduling for Larry

We encourage you to share your most beloved memories of Larry here, so that the family and other loved ones can always see it. You can upload cherished photographs, or share your favorite stories, and can even comment on those shared by others. 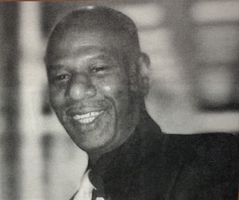