To share your memory on the wall of Larry Rajkumar, sign in using one of the following options:

Larry attended kindergarten and elementary schools
in Trinidad until he was 8 years old before he migrated
to the United States of America, where he became a
U.S. citizen and resided and attended schools until he
graduated high school. Larry lived in Queens, New York, with his mother, Madeline,
and his maternal grandparents, Ruth and Harry Ramjewansingh. His mom and her
parents fondly called him “Duddle”.

Through the years from teenager into adulthood, Larry developed and maintained a
jolly, fun-filled, and carefree spirit toward everyone he encountered during his journey
in life. He always displayed respect to people and their feelings, extending a helping
hand and showing love, kindness, compassion, and hospitality, even while performing
for and entertaining his friends and family, whom he adopted, and to those who were
biologically related to him.

If I had to choose two songs that would give a description of the kind of guy he was,
they would be, Buju Banton’s “D Girls Dem Sugar” and Kenny Rogers’ “To All the
Girls I’ve Loved Before”. He loved in a unique and special way, even though he was
“Larry Hoe”. He earned the name, “Hoe”, which was given to him by his late mother,
Madeline, due to the “line-up” of women he had throughout his lifetime. You name it,
he’s done it!

Larry was into cars and drag racing sports for pleasure and fun. He loved traveling and
the beach, all with a passion. He loved music, and his signature phrase was, “I Love
My Life”. He loved foods of all kinds and from all different nationalities. Once it has
taste and flavor, he was in it. He became a barber by choice and marveled at it, which
served him extremely well, due to his friendly and fun personality, while providing a
necessary service with a smile, passion, and pride for what he did. He earned his living
honestly by what he did and had fun while he did it, all the way, every day.

Larry lived with and cared for his grandparents, Harry and Ruth Ramjewansingh,
until they departed this life, Harry in February of 2009, and Ruth in October of 2019.
He was married to Sunita Natalie Ramanan in July of 2015, and although Larry had no
children of his own, he loved and adored children.

Larry lived a full life, always doing what he loved and sharing his time with those most
precious to him. He was a really happy person in many ways, and like everybody else,
he had his issues and challenges but always managed to find a way to make things
better at the end of the day. He was a friend, a listening ear, a shoulder to lean on, the
one who would always be willing to accept blame or take the fall to save his friends or
loved ones, and most of all, he was sincere about what he did, when he did it.

There is so much more we could go on to say to commemorate his memory, but we need
not say it all, because he lives on in our hearts and memories in one way or another, in
a unique and positive way. Larry would celebrate with us if he could today by eating,
drinking, and being merry, so let us cheer on and celebrate his life today and every day.
Read Less

To send flowers to the family or plant a tree in memory of Larry "Hoe" Rajkumar, please visit our Heartfelt Sympathies Store.

Receive notifications about information and event scheduling for Larry

We encourage you to share your most beloved memories of Larry here, so that the family and other loved ones can always see it. You can upload cherished photographs, or share your favorite stories, and can even comment on those shared by others.

Aneil and Michelle Persad, Mala Sookdeo, and other have sent flowers to the family of Larry "Hoe" Rajkumar.
Show you care by sending flowers

Posted May 06, 2020 at 10:33am
When I moved to South Florida I met you and from the instance we were introduced, we became friends. Your family (Granny, Grandpa, Maddy, R2) looked at me as one of the family. I will never forget one night coming from Bayside Hut, you had the green BMW 760 and said to me "Have you ever driven so fast that the white lines looked like they were moving in reverse?" and you drove that car as fast as you could to prove to me it could happen LMAOOOOO. My Brother you will be missed. I will miss you. Coming back to South Florida will not be the same. I can't stop by and check my man "The Hoe". Sorry I couldn't be there, God knows I wanted to but thankfully there is technology where I can see it. To the family, my deepest condolences. To my Trini Mafia family, I love y'all. Until we meet again my Brother.....Love all the time

Posted May 06, 2020 at 08:54am
23 years of friendship and the angels have come for you. I am great full that we had great memories and you will always have a place in my heart.

Posted May 06, 2020 at 08:40am
Larry “Rajan” you and I shared a special friendship and bound that we will only understand. I will miss you in life. But will have you always in my heart. Love you Larry!
Comment Share
Share via:
MM

Posted May 06, 2020 at 08:28am
In memory of all the fun times that we have shared and the great memories I will always remember when you were around. Rest In Paradise Larry.

I remembered meeting Larry for the first time. It was for the "memorial service" for another young one who departed too soon. (Sharmila). He was introduced to me as "Larry Hoe" and there the jokes and friendship began! It was a night of laughter and fun. We were so loud that the whole group got into trouble with the older people for being too loud so late at night outside😬. After that, Larry will always greet me with that big smile and hearty hug as if we knew each other for a lifetime. The only side of him I knew was that crazy, fun loving,full of life guy. It is extremely sad that he left so suddenly and in such an "unexpected" way. Rest in peace Larry and please hold off on the wild parties up yonder. You shall be greatly missed by your family, friends and acquaintances! 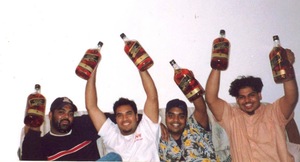 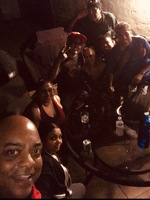 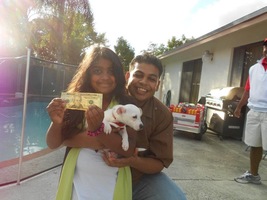