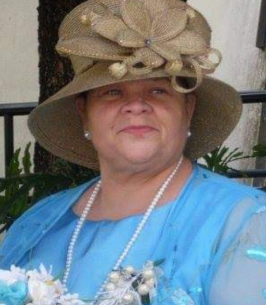 Lottie Susan Elizabeth Nottage was born on the beautiful
Island of Eleuthera, in the Bahamas, in a settlement called
Tarpum Bay on September 14, 1957. Lottie Susan E. Nottage,
most affectionately known as Susan, was the eldest daughter but
second born of eight children to the late Pastor Martin L. Nottage
J.P. and his late wife Elder Mary E. Nottage (nee Hunt). Susan
spent her early years blossoming into a fine and independent
young lady on several islands throughout The Bahamas. After
finishing her high school career at Preston H. Albury High School
(℅ 1975) in Rock Sound, Eleuthera, Susan left home in
Eleuthera to further her studies at the College of the Bahamas
(COB) in Nassau, New Providence. In 1978, while at COB,
Susan obtained her teaching degree. Realizing that teaching was
not her final career choice, Susan furthered her studies in
Accounting & Tourism Affairs. This career shift led Susan to an
accounting position at both The Holiday Inn and The Raddison
Hotel in Nassau, New Providence and Freeport, Grand Bahama
between 1979 to 1996. During this time period of her life Susan
was very athletic as she enjoyed playing tennis, mixed martial
arts & karate, singing and playing the guitar. Susan mastered
her time well as she was also a mother and wife to the late Alan
James Rolle Sr. Alan and Susan met in Nassau,Bahamas.
Where they resided briefly before relocating their young family to
Freeport, Grand Bahama. It was in Freeport, where their family
happily amplified. Then on the early morning of July 10th 1996,
Alan and Susan relocated their family to what is now known as
Miami Gardens, Florida. By July 3rd, 2000 Susan became a

mother. For the remainder of her life, Susan lived in Miami
Gardens and found joy in raising her children and committing her
services most dedicated unto the Lord and her church, Freewill
Christian Center. It was at Freewill that Susan was ordained as a
Minister of the Gospel and eventually ordained an Elder. No
stranger to the word of God, as her father was a Pastor, Elder
Susan gave her heart and home to those in need and was a
listening ear with great counsel to many. Elder Susan lived and
taught forgiveness, love, and spared nothing at the sacrifices for
those she loved and encountered. Elder Susan was well known
for her skills and talents in Decorating & Interior Design. She was
also known to ‘clean a clean house’ on any given day with an
exception to Sunday, as that was the Sabbath and a day for the
Lord. Elder Susan’s compassion towards others has allowed her
to discern the good and bad in people and yet still loved them
unconditionally. Traveling and Theology became Elder Susan’s
personal passion in recent dates. Her grandchildren captured her
heart and made her smile. Elder Susan was affectionately
nicknamed “Bungba” from one of her eldest grandchildren
(Kievon) and the rest of the grandchildren lovingly followed suit.
Bungba wore that name honorably right up until her transition on