To share your memory on the wall of Mary Williams, sign in using one of the following options:

Print
Mary Williams aka (May, Maybel, Itwari) was born on May 12, 1935,
in Trinidad to the parents of Louisa and Ramoutar Patendean-
Henry. She was an only child for her mother and the eldest child for her father.

At the age of 16,... Read More
Mary Williams aka (May, Maybel, Itwari) was born on May 12, 1935,
in Trinidad to the parents of Louisa and Ramoutar Patendean-
Henry. She was an only child for her mother and the eldest child for her father.

At the age of 16, she met and married Margoo Ramkission aka Sonny
Seepersad; through this marriage, they had five children: Gloria,
Maria, Evelyn, Anthony, and Cynthia. After the death of her first
husband, she met Manuel John and had her second son, Emmanuel
John; when that relationship ended, she reconnected with her
school sweetheart and had her youngest son, Junior Bahadoor.
Her uncle, Samuel Carim, told her about job opportunities in St.
Thomas and she made the decision to travel to St. Thomas, USVI,
with Nazim Ali (family member) in the late 1960s. She met and
married John K. Williams in 1973 and from this marriage, she
had her last two children, Camellia and Sabrina. She was known
by all her grandkids in Trinidad as Mother Christmas. She had
a love for plants and flowers and made wonderful Silk Flower
bouquets and sold them out of her home. She always had a flower
garden growing in her yard. She was a people person and could
engage anyone in a good long conversation. She worked every type
of job possible to make ends meet. She worked as a maid, a live-in
babysitter, a secretary, a jewelry sales and sales manager at places
like Gold Corner and Favorite Jewelers, perfume sales in Dadlani’s
Little Europe, and finally, a business owner of Mays Hot and Spicy
Roti on the Waterfront in 1982. She was well-known in the Virgin
Islands for her food and worked for herself until 1993, when she
fell ill. In 1993, after her stroke, children decided as a family that
there was no longer a reason for her to work so hard, so she sold
her business. Once recovered, she resided in St. Thomas with her
daughter, Camellia, and went back and forth to Florida. She was
able to be there and help with the hands-on raising of Christon,
Raju, Nobi, Momo, and Kumar. In 2006, she decided to relocate
to Florida and resided with Sabrina and then transitioned to her
own apartment in 2013. Her grandsons, Christon and Rashad, both
lived with her at different times to make sure she was not alone as
she got older. In 2018, a week before her husband died, she had her
last stroke which resulted in her having surgery for a pacemaker.
In late 2018, she was no longer able to live on her own due to her
health and moved back in with her youngest daughter, Sabrina,
who looked over her until her passing.


On December 3, 2020, at 5:50 a.m., she took her last breath, from
that day to this one, it has broken us all! The loss of our mother,
the Matriarch of our family, we still can’t get over this loss! She
left a rich legacy of hard work, being a good, kind-hearted human
being. She fed the poor and homeless, she went above and beyond
for strangers, and gave anything and everything to anyone in need.
She would give you her last if she knew you needed it. In her lifetime,
she traveled many religious roads on her way to Christianity and passed
knowing and loving the Lord! Her family extends with nine children,
26 grandchildren, and 28 great-grandchildren. She met, knew, and loved
them all!!!
Read Less

To send flowers to the family or plant a tree in memory of Mary Williams, please visit our Heartfelt Sympathies Store.

Receive notifications about information and event scheduling for Mary

We encourage you to share your most beloved memories of Mary here, so that the family and other loved ones can always see it. You can upload cherished photographs, or share your favorite stories, and can even comment on those shared by others. 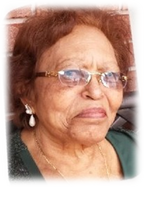