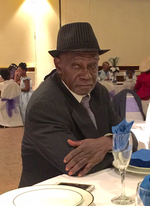 On behalf of the family, I would like to begin by thanking everyone that is here today and
for those who have sent their condolences. We have receive countless phone calls, text, visits,
and thoughts and prayers. ey have both been comforting during this time and have been
a reminder of the impact Dieudonne had on so many others.
Dieudonne Metelus was born on June 1, 1951, to Exavier Metelus from Grand Goave and
Mageritte Gay of Jacmel, Haiti. e two then migrated to La Gonave, where they had seven
children. Dieudonne was the third child and the rst boy. As a young man, Dieudonne
loved listening to good music, and one of his favorite bands was Tropicana. Growing up
was not so easy on an island with so many restrictions, so in August 1981, Dieudonne
decided to migrate to the United States for a chance of a better life. Once he was able to
work, Dieudonne started working in construction. He was so proud to let people know
that he helped build Memorial Hospital. Soon after construction, Dieudonne worked in
the restaurant industry (Flanagan and Gold Coast Restaurant to name a couple). From
the restaurants, Dieudonne ended up in landscaping and working on the lawn of Century
Village for many years. at’s where he found the love of creating art with nature.
Dieudonne never had kids, and he was married one time. Although he did not have kids,
that did not stop him from loving on his nieces and nephews as his own. All of the kids
wanted to go to Dieudonne’s house because it was always fun. He used to spoil all of the
kids by giving them money and walking with them to the store to buy what they desired.
His voice was loud and soft at the same time. His laugh was enough to make you laugh. His
smile lit up a room, and not to mention his house was the spot for all of his cousins to meet
up, listen to music, and play dominoes or cards.
Dieudonne had his rst attack and Century Village let him go due to liability, but that
didn’t stop the ghter in him. Dieudonne started working alongside a gentleman named
Roy assisting in lawnwork. He was not operating the heavy machinery, but he was making
sure that he was getting the job done. Soon after, Dieudonne couldn’t keep up with his
house on his own, and his health started to become a challenge daily. So he decided to
move in with his brother, Mathil Metelus. ere they lived together for 14 years. During
Dieudonne’s time living, he has had countless heart attacks, three strokes, numerous heart
procedures, and God still kept him living. Dieudonne was a ghter, a strong man with a
purpose, and before he died he gave his life to Christ.
As mentioned before, Dieudonne didn’t have any kids of his own, but he helped raise his
brother’s kids, Jean Metelus (his godson), Marilyn Belizaire, Jobanis Erilus, Maxo Metelus,
Keaira Metelus, Markia Metelus, and Martine Metelus, and his niece’s kids, Manoucheka
Civil, Je
son Civil, Jennifer Civil, Nadege Vertus, Jacques Vertus, and Aiden Vertus.
Dieudonne leaves behind: his ve sisters, Ozana, Janese, Marie Rosee, Marie Rose, and
Marie Mathe Metelus; one brother, Mathil Metelu; 28 nieces and nephews, Jesumond,
Clerssaint, Mirlande, Magalie, Josue, Linda Joseph, Jean Gelan, Marilyn, Maxcean, Keaira,
Markia, Martine Metelus, Jeannette, Mirla, Etude Mombrun, Onel Jacotin (godson), Viola
Jacotin, Derzelie, Odette, Marie Carole, Marie Mode, Dieunette Dormilus, Michou,
Gesnel Joseph, Jean Romain, Marie Eveline Pierre, and Marie France Fleuri; and endless
cousins and friends.