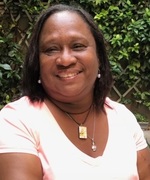 On January 25, 1966, in Saint
Catherine, Jamaica, Ivan and
Mavis Walker had a beautiful
baby girl and named her
Mitzie Christine Walker. In
her formative years, Mitzie
attended Gregory Park
Primary School and then went
on to Bridgeport High School,
where she completed her
secondary level of education.
After high school, Mitzie began to work at Fiscal
Center in Jamaica, as a data entry operator. At the age
of 29, she migrated to the United States of America,
where she got married and gave birth to the love of
her life, Kelecia Thompson, one day before her 30th
birthday.

Mitzie enjoyed traveling with Kelecia. Their
adventures took them to Europe, Canada, a few U.S.
states, and a few Caribbean islands. When she wasn’t
traveling, she spent her free time at home in the
company of their cats, Leo and Moon, or with family
and friends.

Sleep in eternal peace. We love you.