To share your memory on the wall of Polly McLeans, sign in using one of the following options:

Provide comfort for the family of Polly McLeans with a meaningful gesture of sympathy.

Her father was a preacher, but he left her with many unanswered questions when he died. One day, at age 35, she noticed a neighbor was repeatedly visited by an elderly lady. When she inquired further, she found out the visitor was a Jehovah’s Witness named Lizzie Walden. When she got the opportunity to meet her, she got to ask her the one question that puzzled her for many years, “Are my mom and dad in heaven?” She was shown from the Bible her parents were in mankind’s common grave, and a Bible Study was immediately started in the booklet entitled, “This Good News of the Kingdom.” After only seven months, she was
baptized on September 14, 1958 in Macon, GA. When her daughter turned one year old on the following day, she and her children boarded a train and moved to Miami, FL.

Shortly after arriving in Miami, Polly took only two driving lessons from Benny O’Berry Driving School, passed her driving course, got her driver’s license, and drove up until 2012 at the age of 89 years old, when she developed dementia. While in Miami, she started working as a Nurse Aid at Jackson Memorial Hospital in 1958. Her love for Jehovah, people, and the preaching work led her to approach her boss and advise him of this love and burning desire. Her boss replied, “When you get tired of selling books and knocking on doors, you can come back.” So she submitted her resignation and retired in 1979 after being employed there for 21 years working the graveyard shift. She never got tired of knocking on doors; never went back; had no regrets.

Polly started Regular Pioneering in September 1974. As a single parent, she worked as a private duty nurse at night to support her family. After work, she would come home in the mornings, change clothes, eat breakfast, get children off to school, and go straight into field service, then return home for sleep by mid-afternoon. Many times, while at the Kingdom Hall meetings, she would “nod off.” But she set a fine example to her children that the meetings and field ministry was of utmost importance. She kept this good early schedule even when she stopped working secularly. She would get her yearly pioneer hours, early in the day, early in the week, and early in the year. This same mindset rubbed off on her children, grandson, and many other faithful friends. It was often said, “If you need to get your time, work with Sis. McLeans.” Friends her age and younger said, “When she said, “Let’s go, before we could get up, she would be gone.”

She enjoyed other earlier privileges such as; Account Servant, Home Bookstudy Conductor, and helped with Magazine Subscriptions when there were not enough trained brothers to assume these positions. She also had the privilege of traveling to Turks and Caicos Islands and participate on their Assembly Programs several times. Her most treasured privileges were attending Pioneer School four times, first class in 1979, second class along with oldest son Henry in 2004, third class in 2013, and fourth class in 2018. Over the years of preaching, she was able to assist all four of her kids and her sister-in-law, Alma Lois Henderson, to dedication and baptism, along with over 15 others. Some have progressed to be Regular Pioneers, Ministerial Servant, and Elder. Her son, Henry, in 1963, was appointed Congregation Servant, same as COBE. He was assigned to a congregation in Opa-Locka, where the need was great. He has served in several congregations, fulfilling many duties in the local area. He is currently an infirm Pioneer and has pioneered for a total of 17 years. Her daughter has been pioneering for over 10 years.

Polly was dearly known as: Mom, Grandma, Auntie, Polly, and “Polly Wolly”. Many of her friends still remember and call her with endearment, “Sis. Williams,” which she would still acknowledge. She is called, with much love from only one dear sister as, “Fat and Fresh,” quoted from Psalm 92:14 (Reference Version).

She was very fashionable and loved to wear her high heels with the matching purse. She wore her
high heels well into her late 80’s.

She loved reading, preaching, feeding the Traveling Overseers in her home, recording herself reading the Awake Magazine and later play the cassette in her car, vacation cruises, card games, TV game shows, word search puzzles, and giving out “tax free” kisses. After she would receive kisses, she would reply, “ Oh, I needed that”. Also, after anyone would ask her, “ How are you doing?”, she would reply, “Ok to be an old lady”, or “Great, since I seen or heard from you!” She loved saying her catch phrases such as “GOTCHA!” and “Shake that thang!” If you hung around long enough, she would request, “Rub my back!” She peacefully slipped away in death on Thursday, October 31, 2019, at age 97, after suffering many years with back pains.

We encourage you to share your most beloved memories of Polly here, so that the family and other loved ones can always see it. You can upload cherished photographs, or share your favorite stories, and can even comment on those shared by others.

Posted Nov 14, 2019 at 10:20am
Abdul, our thoughts and prayers are with you. Please accept our condolences. Your BBB family. 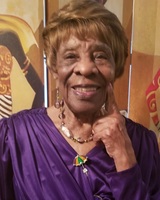