To share your memory on the wall of Robert Wiley, sign in using one of the following options:

Robert was converted at an early age and was a member of Fielding Spring
Baptist Church, under the pastorate of the late Reverend H. Mines.
He received his education through the Richmond and Miami-Dade County
Public School Systems. Robbie was an alumnus of Miami Northwestern High
School. He was very outgoing and loved life. With “Robbie”, there was never a
dull moment. He had a love for cooking and never feared new adventures. He
will always be remembered as “The Life of The Party!”

Jesus answered, “I am the way and the truth and the life.
No one comes to the Father except though me.
Read Less

To send flowers to the family or plant a tree in memory of Robert Wiley Jr., please visit our Heartfelt Sympathies Store.

Receive notifications about information and event scheduling for Robert

We encourage you to share your most beloved memories of Robert here, so that the family and other loved ones can always see it. You can upload cherished photographs, or share your favorite stories, and can even comment on those shared by others. 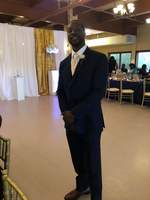