To share your memory on the wall of Savitri Ramanan, sign in using one of the following options:

She attended Boyd H. Anderson
High School before marrying Ricky Samaroo in
(1997) and becoming the mother of two sweet boys,
Rishi (in 2001) and Suresh Samaroo (in 2002). Sunita
and Ricky divorced in 2007, allowing her to meet
Larry “Hoe” Rajkumar, whom she wedded in 2017,
surrounded by their loved ones.

Sunita loved playing board games and building
puzzles with her friends and family. She was a terrific
cook and made sure everyone was fed to satisfaction.
She was self-sacrificing, going to every end to make
the people around her happy and cheerful. Every
room she entered was lit up by her bubbly personality
and free spirit.

On April 26, 2020, Sunita’s story came to an abrupt
end. She will be mourned by many, including the
countless people whose lives she touched with her
kind heart and generous spirit. Sunni will be missed
by her many aunts and uncles, loving cousins, nieces,
and nephews.
Read Less

To send flowers to the family or plant a tree in memory of Savitri "Sunni" Ramanan, please visit our Heartfelt Sympathies Store.

Receive notifications about information and event scheduling for Savitri

We encourage you to share your most beloved memories of Savitri here, so that the family and other loved ones can always see it. You can upload cherished photographs, or share your favorite stories, and can even comment on those shared by others.

Vera Sookraj & Family, Anusha and Derek Rampersad, and other have sent flowers to the family of Savitri "Sunni" Ramanan.
Show you care by sending flowers

Posted May 07, 2020 at 09:52am
To the Ramanan Family, Wishing you peace to bring comfort, courage to face the days ahead and loving memories to forever hold in your hearts.

Posted May 06, 2020 at 11:23am
The memories we have growing up will never be forgotten ! You will be missed by everyone.! REST IN PEACE BEAUTIFUL. Till we meet again.

Posted May 05, 2020 at 08:14pm
Wishing love to bring you comfort, the courage to face the days ahead, and happy memories to forever hold in your hearts. My deepest condolences.

Ashley and Andrew purchased flowers and planted a memorial tree for the family of Savitri Ramanan. Send Flowers

Posted May 05, 2020 at 05:52pm
"Sunni" you will remain in our hearts and minds forever. Heaven has gained another angel. You will be greatly missed. May you sleep in peace ST.

Posted May 05, 2020 at 10:57am
Wishing peace to bring comfort, courage to face the days ahead and loving memories to forever hold in your hearts. 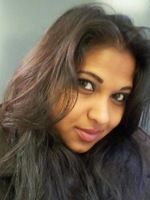