To share your memory on the wall of Tamar White, sign in using one of the following options:

Provide comfort for the family of Tamar White with a meaningful gesture of sympathy.

Let’s reflect on the person, a beautiful person, Evangelist White was born July 11, 1930, to Charles and Alice Ennis at Aenon Town in Clarendon Jamaica. She was the fifth of nine children. She went to live in Kingston 1945, and in 1947, she accepted the Lord Jesus as her personal Savior and served faithfully for the rest of her life. On January 18, 1958, Sis. White was married to Wilbert White. The union produced five children, four girls and one boy: Veronica, Pamela, Wilbert, Veletta, and Bernadette. She was a devoted wife and mother. She has raised many children during her lifetime, both from her ministry and the community. Her love for people was contagious, and she showed it without discrimination. Evangelist White was affectionately a
called spirit-filled Christian, whose life demonstrated her walk in the fruit of the spirit.

Sister White was passionate about her salvation experience and desired to share Jesus with others. As a result, she was ordained to become an Evangelist on April 1972. Shortly afterwards, along with her husband, they started ministering at the Central Village Church, where they served until she migrated to New York in October 1974. There, they started the New York Church which grew until they migrated to Florida in 1989.
Evangelist White was a very strong prayer partner. She knew what it was to pray without ceasing, to intercede for others, and to petition to the Lord on behalf of the nation. She knew for sure that her prayers were answered based on the results.

We encourage you to share your most beloved memories of Tamar here, so that the family and other loved ones can always see it. You can upload cherished photographs, or share your favorite stories, and can even comment on those shared by others. 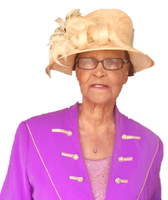