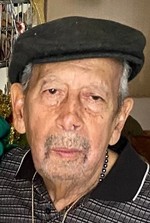 Victor M. Luquis was born on December 18, 1934, in Caguas, Puerto Rico the oldest of five siblings. He
went to primary school and high school on the island. In the 1950’s, the family had the opportunity and
moved to Brooklyn, New York when in 1959 he was drafted into the Unites States Army. He did basic
training at Ford Dix, New Jersey, and traveled the Unites States, with bases in Fort Riley, Kansas and Fort
Lewis, Washington. In the military he learned pharmaceuticals and continued the white coat profession
when he was discharged. Back in New York, he met a striking green-eyed Puerto Rican beauty named
Carmen “Ceci” Rivera and it was love at first sight. On September 7, 1963, they were married in a
beautiful wedding in New York and honeymooned in Bermuda. He bought his new bride a Co-op in the
Williamsburg neighborhood of Brooklyn. On August 19, 1965, their life changed with the birth of their
daughter, Glenda Karen. On July 4, 1967, the family grew, and Ronald Victor was born. He continued to
commute to work on the subway into Manhattan working at Berner’s pharmacy. He saved his money
and took his family on vacations which included trips to Florida. On July 29, 1977, Victor Kevin, the third
addition of the family was born. In 1979, between the growth of the family and the era of 1970’s New
York, he took a gamble and went to South Florida to find a job to seek his dream of a house with a
backyard and a pool. He found a job at Lee Ann’s Pharmacy in Miami Beach which required him to drive
a car, which he never really did living in New York. His hard work and perseverance paid off, purchasing
his dream home in Lake Forest, Florida. He moved his family across the country from cold New York to
sunny Florida. He raised his family in the same home, with all the trials and tribulations that a family of
five comes with. He took the family on trips to Orlando and worked seven days a week. As the family
grew older, education was first for him. He provided stability giving the children the support and
opportunity to achieve a college education. As the children got married, he slowed down at work and
spent his precious time at his home with his Ceci. In the early 2000’s, at social security age, he decided
to stop working and stay at home and enjoy life. With Ceci working until 2010, he stayed home on his
porch and tending to his avocados in the backyard. When Ceci retired, they enjoyed life in the
neighborhood and with the grandchildren. They enjoyed spending time with the growing family,
including eating and laughing. He was the high definition TV of every family member. In his later years
he even like to shake his backend to any audiences. Even as age came upon him, he enjoyed every
waking moment with Ceci and the family they created. He was the patriarch and layed the groundwork
for this family to continue to prosper. God called for him and he is survived by his loving wife Ceci, three
children: Glenda, Ronnie, Victor, son-in-law John Sanchez, daughter-in-law Viviana, daughter-in-law
Patty, nine grandchildren (Vanessa, Veronica, Victor Enrique, Victor “VK” Kevin, Gianna, Johnny,
Zachary, Marcus, and Kamila). He will live forever with us and in our hearts as “Cookero,” Dad, “Lalo,”
Victor, Don Victor, Mr. Luquis. Luquis-3 forever.